Interview with Ruth Dugdall on Her Latest Thriller

Interview with Ruth Dugdall on Her Latest Thriller 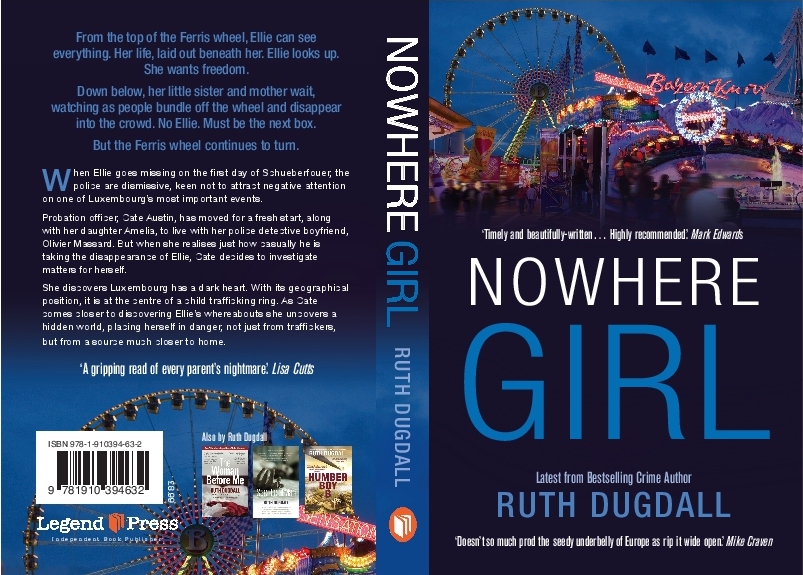 The story is set in Luxembourg and explores the dark topic of child abduction. When a young girl disappears at the popular annual Schueberfouer (fairground) event, new resident and Probation Officer Cate Austin attempts to investigate the crime. As she begins to piece together the clues, she uncovers dark secrets in the town and begins to wonder if she is discovering a child trafficking ring, or is there something more dangerous and sinister happening closer to home?

I offered to interview Ruth recently in order to find out more about this promising and gripping new title. I  unveiled her latest journey to Luxembourg where her story idea stems from, what each book means to her, plus she provided me with an interesting little insight into her next upcoming project which she has already begun working on.

Well done Ruth and thank you for the interview.

Ruth, your latest novel “Nowhere Girl” isn’t officially published until October, can you tell me a little bit about your inspiration for this story?

“I had just moved to Luxembourg, and was feeling a bit lost. Far from home, in a country I wouldn’t have been able to identify on a map just a few months before, where the common language is one I don’t speak. It was scary. And then, dropping my children at school one day, I saw a poster:
Make sure you accompany your children to school.

When I asked why, I found out there had been three attempted kidnappings close by and that got me thinking – how frightening, to have a child taken in the centre of Europe. Where would you begin to search? And if the mother was a `foreigner` – an ex-pat – how would she feel, dealing with police and press? I pitched the idea to my publisher and started writing.”

How did you find the story-planning process compared to your previous books, does it get easier to come up with a new storyline?

“Coming up with the storyline isn’t the difficult bit, it’s what follows that is a challenge. Especially because I needed to start researching in a place where I didn’t know the Criminal Justice system. I was very lucky, though; I got advice from social workers and police, and was approved to start prison work here in Luxembourg, so that all added to my knowledge. But I was also writing from the point of view of Cate (my probation officer) who had also `just landed`, so any questions or confusions I experienced I could project onto her.”

Do your novels have a link or are they completely separate characters and themes?

Cate links my novels, she’s in all of them (except The James Version, which is historical). But the difference with ‘Nowhere Girl’ is that she is no longer a probation officer, and she operates more like a private detective or investigative journalist in this novel. I really enjoyed that shift, as it gave her more freedom to act without being constrained by her profession.

As for themes, all of my books are about deviance, things that threaten the hearts of families, like abuse and violence. I’ve been more political in this book, as it looks at human trafficking.”

Was there much research involved in this book?

“Yes, more than with my last book (Humber Boy B) as I was writing about a subject I hadn’t directly worked with – kidnapping and human trafficking. I was really outside of my comfort zone, but I found that exciting. I also really enjoyed using the locations I was visiting within the novel; Metz (in France) and Heidelberg (in Germany) both feature as well as the city and country of Luxembourg.”

As a fellow author I am prone to procrastinate quite a bit when it comes to getting all the chapters written, how do you discipline yourself to reach the very end?

“I’m not a procrastinator, I have the opposite problem, in that I tend to rush when I should slow down. Having said that, previous novels have taken years to be published, so I had lots more time than I wanted. But with “Nowhere Girl” I was in a short deadline, and that kept me focused.”

Some authors with multiple books published can favour one over another, do any of your novels stand out meaningfully for you?

“My books all say something about my life, and what was happening for me personally, at the time I was writing. So “The Woman Before Me” is very much about new motherhood, and was written during my maternity year. “Humber Boy B” came into my mind when I was working in a prison with children guilty of terrible crimes.

So, in that sense, all of my books have meaning for me. “Nowhere Girl” will always be my Luxembourg book. If I had to select one book as more meaningful it would be “The Woman Before Me” as this was the book that found me a publisher, and an audience.”

What does your family think of your writing?

“My family are all very supportive, and without that it would have been very difficult to pursue such an unpredictable and financially challenging career. My husband has always believed in me, and values what I do, which is hugely important to me.

My Mum and Dad value the creative arts highly, and allowed me to follow my dream when I was young, and wanted to study drama and then English Literature. I shudder when I hear people talking about the arts as `easy` subjects, or suggesting their children choose `sensible` degrees. I followed my heart, and I would encourage anyone else to do the same thing. Life is too short to do otherwise.”

Have you learned anything valuable during the creation of your books?

Gosh, so much. About the process of writing. About myself. About the various subjects I have researched.

“One thing I have come to believe, is that no subject should be off-limits. Writers should be brave. Earlier on in my career I tried to change my style, and tone my novels down, in order to attract a commercial publisher. I’m so glad it didn’t work!”

How have your readers responded to your books so far?

“In the main I have been surprised and delighted by the feedback, and am always grateful when people take the time to either contact me of post a reviews on-line. Of course, I know my books don’t please everyone, but that was never the goal. To reach an audience, however select, is the prize.
Of course, with every new book brings fresh anxiety; will readers get it? Have I managed to convey the themes? And – most importantly – is it a good read? With Nowhere Girl I will know after October 31st!”

What are your future plans in the writing world?

“I have just finished re-working a novel that I have been working on since 2006. It’s about a sixteen year old girl named Sam, whose sister has been attacked, and left brain-damaged. Sam has resolved to discover who attacked her sister, but in doing so places herself in grave danger, as she exposes a very dark secret.”

Ruth Dugdall worked as a Probation Officer for almost a decade in high security prisons in the Suffolk area. Now living in Luxembourg, she is currently working at a local prison. Her novels have won various awards including twice winning The CWA Debut Dagger Award for The Woman Before Me and The Sacrificial Man.

Nowhere Girl can be pre-ordered from Amazon

The Sacrificial Man – Buy from Amazon 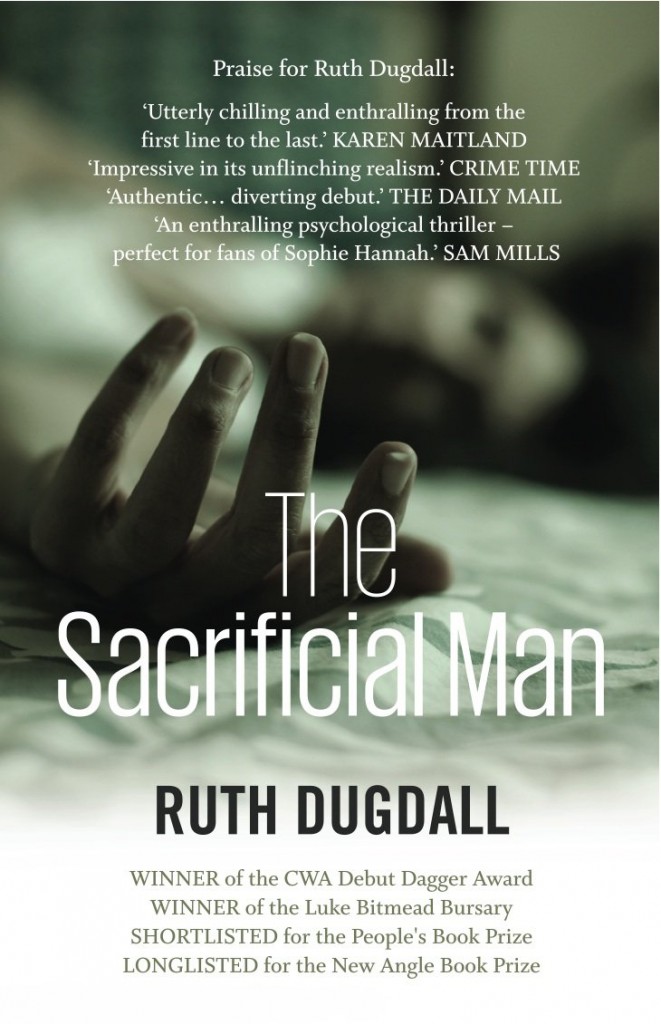 Humber Boy B – Buy from Amazon 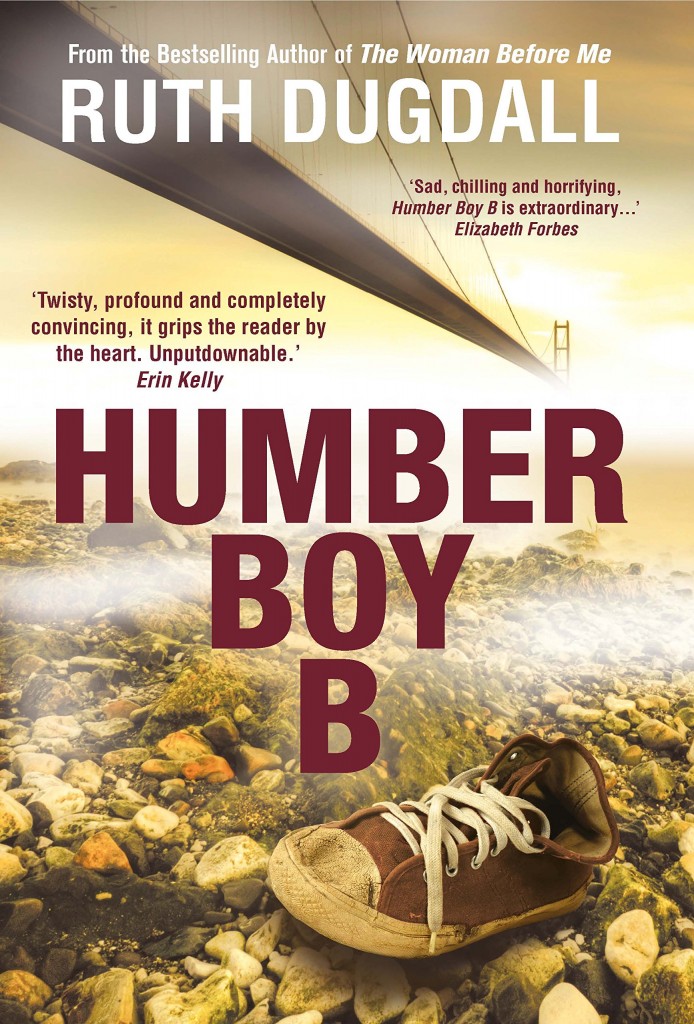