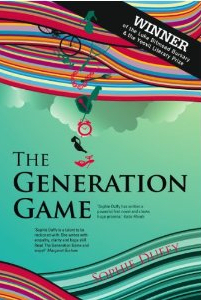 As an aspiring writer, one of the things I love to do is follow the journey of other authors in the published world. Recently, I was honoured to make contact with and interview Sophie Duffy, a hardworking writer who has steadily followed her own literary dream.

Through the fruits of hard labour she has now reached an admirable peak with the successful launch of her debut novel, The Generation Game.

Winner of the 2010 ‘Luke Bitmead Bursary’ award ‘The Generation Game,’ is published by Legend Press and can be pre-ordered at Amazon bookstore.

Book Description – Philippa Smith is in her forties and has a beautiful newborn baby girl. She also has no husband, and nowhere to turn. So she turns to the only place she knows: the beginning.

Retracing her life, she confronts the daily obstacles that shaped her very existence. From the tragic events of her childhood abandonment, to the astonishing accomplishments of those close to her, Philippa learns of the sacrifices others chose to make, and the outcome of buried secrets. Philippa discovers a celebration of life, love, and the Golden era of television. A reflection of everyday people, in not so everyday situations. 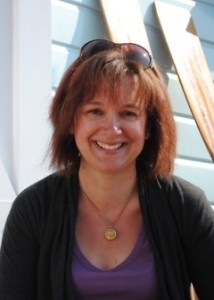 ‘Sophie, congratulations on your publishing success. How would you describe your book to us?’

‘The Generation Game is set between 1965 and 2005 and Torquay and London. Philippa Smith has just turned 40 and has a newborn baby. Believing she’ll be a bad mother, she tells the story of her life to her baby, hoping this will help her come to terms with her past and start on a more conventional, stable, happy future.’

‘How challenging was the writing process for you?’

‘Writing the novel was the easy bit! I’d already written two previous (un-publishable) novels and they were both a challenge – partly due to the techniques I was trying out and because I was trying to find my voice. Then I wrote a short story called Out of the Birdcage that won a local prize and found that the characters stayed with me. That short story became The Generation Game. I knew pretty much where I was going with it but there were some surprises along the way that I hope will also surprise the reader. The hard bit was trying to find a publisher.’

How much of your novel is based on experience or personal traits?

‘It’s definitely fiction though the setting comes from personal experience. We lived in a newsagent’s in Torquay for two years in the mid-70s which was the starting point for this story. The characters are all made up though I’ve pinched certain traits and tics from people I’ve known or brushed against during my life.’

‘Do you find a second novel more daunting after your success with The Generation Game?’

‘I’ve got a second novel all written so I’m hoping this will also see the light of day at some point in the future.’

‘Most successful novelists have said they read a lot, do you think this is a prerequisite to writing a good book?’

‘Yes. I studied English at university and love some of the classics. But I mainly read contemporary fiction now. For me, reading and writing go hand in hand – the more I read, the more I want to write and the more creative and in the zone I feel. ‘

‘Now that your book is almost on the shelves, what elements of its success are important to you?’

‘The book will be on the shelves on 1st August – I can’t get over that yet! I’m just ecstatic that people will be able to read the story I’ve written.’

‘Are you an e-reader, or prefer traditional methods?’

‘I love books and our house is full of them. I do have a Kindle but haven’t got to grips with it yet.’

‘Do you think self-publishing is better than traditional publishing?’

‘They both serve a purpose. If you are desperate to see your book in print and have exhausted the traditional route, then why not self-publish as long as you do your homework and use a reputable publisher.’

‘Do you ever wake up and think.. ‘Oh my goodness I’m a real published novelist?’

‘Yes, every day! I can’t believe it. I still feel it could all be taken away from me as it’s been such a long time coming.’

‘Will your next book be along a similar theme?’

‘I am interested in family life, whatever form that takes. My next novel is about a more conventional family coming to terms with their new unconventional life.’

‘Did you decide on the theme immediately and how did you draw all the characters together?’

‘No, I started with the setting and Philippa, my main character – it all evolved from there.’

‘Do you wing it, or carefully plan each part of your book beforehand?’

‘I’d like to say I plan meticulously but unfortunately that would be a lie. I wing it. Some people would call it ‘organic’ but I suspect it’s just me being disorganised. I do think that if I had each scene planned out I couldn’t be bothered to write it. I like to be surprised as I go along. I didn’t know the ending of The Generation Game as I began it.’

‘I have a friend with four children, she’d like to know how does one balance family life and writing?’

‘I started ten years ago when my kids were 3, 5 and 6 so I learnt early on to write in short bursts. Writer’s block was a luxury I didn’t have. Now they are all teenagers, I have longer chunks of time during the day and find displacement activities keep me busy. Evenings are spent ferrying them around from place to place. So now time is more of an issue and I suppose I should finally get more organised. I wish someone would tell me how to balance it – it’s the same for any mother. ’

‘For those of us who struggle to complete a novel, how would you recommend we get from A to Z?’

‘Have deadlines. Competitions have always focused me. Try and get in a rhythm of just doing a bit of writing each day. When I am writing a novel I will print off my day’s work and write all over it. Then the next morning I will type up my corrections on my laptop so I am not starting with a blank page. Somehow that keeps me going to the next part. Once you get over the 20,000 word hump, I find it gets easier!’

‘What is your own favourite book or author?’

‘I have lots. Classics: George Eliot’s The Mill on the Floss – I love Maggie Tulliver. Contemporary: I like Graham Swift, David Lodge, Kate Atkinson, Sarah Waters, Marina Lewycka, Clare Chambers and I absolutely love David Nicholl’s One Day. And for a cracking turn of phrase there’s always Alan Bennett.’