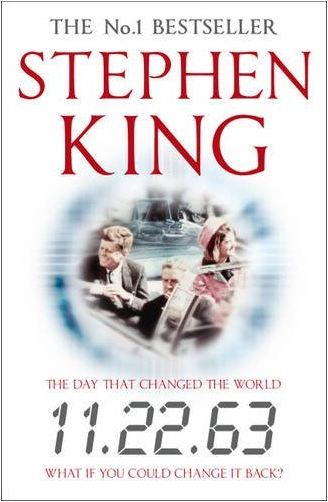 “What if you could go back in time and change the course of history? What if the watershed moment you could change was the JFK assassination?”

This is the definitive storyline of the mammoth beast of a book written by the accomplished legend Stephen king.

One cannot write a ‘short and sweet’ review of this book. It would be unjustified, inappropriate, as the story is powerful, and a whopping 800 pages long. At certain points I felt like I needed to hail a taxi to get from one end to the other, but on reflection I am glad I persisted. A quick ride would have ruined the slow but progressively interesting development of the characters within each page.

Main plot:  The protagonist, thirty-something teacher Jake Epping, jumps into a rabbit hole at the back of Al’s diner leaping from 2011 back to 1958. The plan? To work his way towards preventing Lee Harvey Oswald from assassinating the President of America.

What an ambitious pitch! It thrilled me, even though I had to wait a whole 650 pages to find out exactly whether Epping changed the course of history – or not. No spoilers here, but when he did finally get close to the assassin I felt I had travelled a long long way in King’s world.

I’m sure many would agree that time-travel is also an exciting screw-ball of a concept. Attach it to a very famous historical event and, if well executed, is bound to send big waves rippling through literary circles. Just look at the very popular ‘Time Traveler’s Wife,’ by Audrey Niffenegger as one example. In this story however, King is convincing. We really feel we have travelled back in time.

King uses his familiar voice and style which his fans can expect, often expressing his own nostalgic interest in the late sixties to early seventies American culture. My only gripe is that some of this narrative can be puzzling for a British reader. I found myself skipping over paragraphs and sections which were just too.. well..American! Baseball mumbo jumbo? No thanks! Having said that, in no way did it limit my enjoyment of the story. One learns how to successfully ‘skim’ after years of reading.

Built into the major plot were the less critical, but still very effective, sub-plots the most endearing being Epping’s new-found love in the form of a young librarian named Sadie, and their impossible future as a couple. Some great character development and sentimental moments arose, especially when Epping wanted to drag Sadie forward?…. into the ‘future’ to get her some modern medical treatment. I can’t even compute or decipher that idea but it’s mind-boggling all the same, and also, fraught with impossibility even in a fictional context. As King tends to remind us at intermittent points in the book…”History does not want to be changed. It is obdurate.”

Epping’s amateurish espionage and ‘eavesdropping’ on the Oswald family was filled with tension and intrigue, we get to know a little more about Marina, who suffers domestic abuse thanks to her husband Oswald’s bouts of temper, and her devotion to her daughter. I could not help flicking over to the Kennedy archives to compare historical accuracy regarding their characters. The closer the main character got to the ex-marine, the more the reader is compelled to read on to discover the outcome. The multiple conspiracies behind the assassination provided King with an excellent backdrop in which to explore a more ‘fictional’ outcome of events.

From my experience with King’s books, I feel the response to this novel would be divided. King, for me (and many others) has always been a masterful writer of horror. Mention his name and we all think of killing clowns, dark psychologically-warped characters or little Fido returning from the grave! (Pet Sematary). For me though, he IS the master of story-telling, even when some of his books didn’t press my buttons as much as I’d hoped, and there are a few I did not find enticing enough to try. But King undoubtedly possesses one thing –  the ability to capture a reader’s attention and then take them along an interesting ride. He always surprises the reader, whether he is dabbling in new conceptual book ideas or not.

The impact this book had on me is memorable. I found it refreshingly original because it evoked a strong sense of intrigue. There is something undefinable about it, which I think makes it go ‘above and beyond’ what I believe any other author could have achieved. Only a brave writer could tackle it.

I would also agree with grammar perfectionists that this novel was not ‘perfectly’ written by any means. But who cares about perfection when we are entertained with an expertly crafted story written by a skilled storyteller? King never fails to deliver something ‘off the beaten track,’ and at the very least promising, if not mind-blowing. We find that his legions of fans stick with him because more often than not they ‘get’ who he is,  they get his work, and the fact that in a very admirable sense, he isn’t afraid to try out new things.

“Big read but well worth the effort.”