Review: Heaven is for Real by Todd Burpo

Review: Heaven is for Real by Todd Burpo 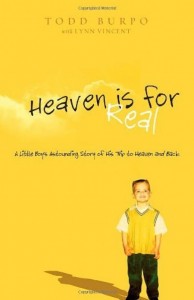 Non-Fiction – Heaven is for Real is the story of a four year old boy who sheds some remarkable experiences of visiting heaven and meeting God after life threatening surgery.

Colton Burpo witnesses his own little body from ‘above’ as Doctor’s battle to save his life. He also sees his own father praying in the waiting room. Other information Colton later reveals to his parents are having met his own ‘miscarried’ sister (of which he knew nothing about) in Heaven. God apparently, sits in a large chair and there is a last and final battle between good and evil, to which (according to this little chap,) his own Dad will yield a sword and fight.

Astonishingly, this book has gained immense popularity, setting off most believers on a heavenly glow of smug satisfaction. If we are to believe an innocent four year old then surely God and Heaven truly DO exist?

My first thoughts on the book were rather neutral. Then I scanned the back cover blurb and realised Colton’s father was a Pastor and thought… ’Oh here we go again..yet another bible-bashing nut keen to cash in on yet more holy bible babble!

But as a believer myself, should I really not ‘doubt’ this man’s account of his son’s experience? Should I just accept it as truth that a four year old claims he reached heaven, attained wings, and that Jesus is a kind and venerable person that we can chat to on a pretty cloud? Forgive me but part of me still raises some heavy doubts.

The book is told through Colton’s father’s voice. I can’t help but wonder if Dad mightn’t have got carried away with his child’s embellished fantasies. Being a Pastor, well, wouldn’t that go some way to explaining his already fervent interest in the actuality of Heaven and God?

Let’s face it, if most parents heard their children claim to have been to heaven, gained wings and met God, they’d pat them on the head, hand them an ice cream and tell them to go do their homework. After all, most children can make up some bizarre fantasy stories, and how would we know if Colton hadn’t just made his up too? Well, we don’t. And this is why this book comes under just two columns of readers – ’I believe’ and ‘I don’t!’

Scepticism aside, the book is a light read. So light in fact, it’s almost diary like. Mr Burpo speaks as though recounting the whole matter to a friend. There are no lengthy or persuasive passages of scriptures, or drumming home of his son’s heavenly status, neither does he attack his readers with amplified biblical details. I realised that Mr Burpo comes across as quite an ordinary father, who by all accounts, is indeed very surprised by his son’s revelations. So much so that he insists it took a long time for him to actually digest them, or come to terms with the ‘facts’ as they are revealed to him through innocent eyes.

What I am left to wonder is, how long will it be now before this book sets off a chain of stimulated authors, eager to write and cash in on their holy experiences?  Are we to believe them all? As Mr Alcorn puts it in his ownreview of this book “Don’t base your theology of Heaven on any book that tells of someone’s personal experience and memories, no matter how sincere they may be.”

I feel this book will be nothing more than ’ridiculous’ to those who disbelieve. Many others will  find it ’interesting’ or ‘heartwarming’, and others may be lined up and ready to join the Burpo’s in the last battle between Heaven and Earth.

I for one cannot take the book so literally as to merit it a profoundly new scriptural or prophetic truth. I respect the author and his own family’s opinions, but I must take this story at face value that this may be ‘their truth’ but not necessarily mine or everyone elses.