Review: The Lady of The Rivers – Philippa Gregory

Review: The Lady of The Rivers – Philippa Gregory 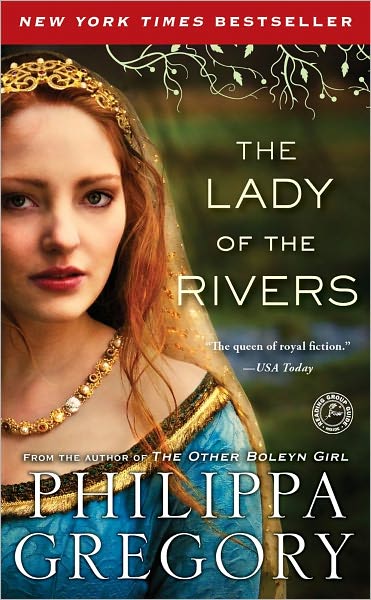 ‘The Lady of The Rivers,’ is one of a set of books written by Gregory, and set in the early 15th century during the Wars of the Roses. Some time ago I read ‘The White Queen,’ which is based on the life of Jaquetta of Luxembourg’s eldest daughter Elizabeth Woodville. Interestingly, this novel is based on Jacquetta herself. When I began reading I wondered if I should have read this title first, but in actual fact, that didn’t really matter at all. The two novel’s story threads (although linked together) would not cause a problem if they were read in a different order.

Now Jacquetta of Luxembourg, to give you the bare facts, is painted as an intelligent, ambitious woman with many hidden powers. During the reading of this book (and how much of it is actually true or not, who knows) I felt that she was highly ambitious and much less of a stay-at-home mum than one ought to be with fourteen children! Imagine having that many screaming toddlers, and still finding time to sit at court pandering to the needs of the Queen of England all day as well as riding off into the midst of a battles to watch the turn of events. It is obvious how rich and advantaged these people were, as with that many kids in the 21st century you would find it almost impossible to survive, eat or sleep, not to mention how your breasts would glow like beacons and very likely be sweeping the floor, but ah…of course.. they had wet nurses in those days. Good move!

The main beats of the story are: a young Jacquetta is married off to the forty-something Duke of Bedford, an old man who doesn’t wish to bed her at all, which is strange for the times, and therefore she produces no heirs in his name. After his death, she marries his squire, Richard Woodville for true love, and whilst he spends much of his time rooted to a pier in Calais to defend the city from French attack, Jaquetta stays in England at court to keep the current English Queen Margaret of Anjou sweet and happy. When Jacquetta’s husband makes random impromptu appearances back home, they earnestly set upon the serious task of mulitiple baby-making.

The most interesting part of this story for me was the relationship between Queen Margaret and her husband King Henry, and his so called ‘sleeping disease.’ I had to wonder whether in modern parlay, he was just in some type of ‘coma,’  but when he awoke every so often, he lacked coherency and suffered forgetfulness, which could today have been diagnosed as a mental illness such as dementia.

Alternatively, as was suggested, he could have been affected by his wife’s publically ardent devotions to the Duke of Somerset, or just  tired of being a used and abused King, or could he have been cursed by an Alchemist or enemy as his wife feared? Perhaps we shall never know, but one had to feel immense sorrow for him, with a fragile soul and sick mind all he really needed was a year long inscription to Sky Sports, a bowl of noodle soup and paperwhite kindle packed with all the classics to keep him amused. More is the pity that he was five hundred years away from that kind of amusement. So instead the king lolled about on his throne, salivating at the corners of his mouth, and was dragged about as a puppet in an effort to appear normal to his subjects, enemies and the court.  I truly loved the visceral scene where the king began to sing like a madman, to which a pageboy shoved his knuckles in his own mouth to keep from laughing.

The relationship between Jaquetta and her Queen seemed complicated, angst-ridden. Margaret the Queen of England appeared as an ambitious, selfless individual who would stop at nothing to keep the English crown, even flaunting about her puppet of a husband King Henry and making the Duke of Somerset her little playmate, to which rumours abounded that her son was conceived by him and not the King. When the whole of England finally turned against the Queen, she dropped her sewing and retreated back to France or Scotland, but still tried to cook up her big return. Did these people never give up or give in?

Jaquetta, dragged along helplessly by the Queen’s whims and tantrums spent much of her life away from from her husband in faithful support of the Queen, and endured many hardships, mainly in waiting through battles which her husband and son were sent off to fight. I can’t imagine her face at the last moment when they both returned to say they had turned their allegiance to the enemy, the Yorks and no longer supported the Queen. Oh dear. Jacquetta would have needed some chocolate and counselling at that point. Instead she fights in support of her family and looks around for another rich royal to sell her children to in order to return to court and bask in the limelight of the rich and powerful once again. And so, my overall impression is that they were all a little bit power crazy, and very bad at practising the ten commandments.

I conclude that I enjoyed this book immensely. The writing was exquisite, even though much of the time I had no idea which duke was which and which duchess was married to whom. But Gregory is a very talented writer, which is testament to her success. I look forward to reading other books in this series.