The Book That Hooks

The Book That Hooks

What makes a great hook?

What defines a hook in storytelling?

A great hook isn’t just limited to crime or thriller novels, it is also carefully woven between stories of  love, passion and human experience. Sometimes a book pulls us in just by its subject matter.

I am most attracted to books which reveal human nature in all its sordid levels. One of the most shocking books I have ever read was indeed based on a true story. I was completely hooked the minute I laid eyes on this particular book and I knew it was going to be an emotional read.

It was written by a white young reporter growing up in South Africa. A descendent from a Government minister, who in actual fact had a direct hand in Apartheid, a controversial law which claimed the lives of millions of blacks and whites. For those unfamiliar with Apartheid, it was a political system of legal racial separation which dominated the Republic of South Africa from 1948 until 1993.

My Traitor’s Heart by Rian Malan is the author’s account of growing up in South Africa. It is brutal, illogical and terrifying. As soon as I read the back cover blurb in a bookshop I knew that if I read the book it would move me emotionally, if not tear me to bits. But we positively thrive on that sort of stuff don’t we? Isn’t that what we look for?

My Traitor’s Heart: A South African Exile Returns to Face His Country, His Tribe, and His Conscience (NONE) 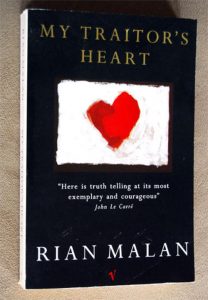 So, the hook in it for me was the subject matter, and if I’m completely honest I neither wanted to read Malan’s book, nor did I want to take my eyes off it.

Here is why I was hooked:

Malan grew up with both black and white people. He knew them, understood them, yet he lived within the confines of a society which did every possible action to keep them apart. Having witnessed many atrocities from both sides, one paragraph struck a chord.

‘I loved blacks, and yet I was scared of them. I was scared of them, and yet I loved them. It was a most paradoxical condition. One minute, you’d be harrowed with guilt and bleeding internally for your suffering black brethren. The next, you’d recoil from the things they did, and from the savage latencies that seemed to lie buried in their hearts.’

Malan led me in quite deeply with his observations, his viewpoint on life and its horrifying extremities, in a way that fictional tales don’t quite cut it for me in the same way. Yes, I can be moved or hooked by a thrilling fictional story yet the undercut of it remains that it is just that, fiction. For me, nothing ever matches things which actually happen. Things which people have actually felt or continue to feel.

Once I had finished it I reflected on a few points. One was that I felt lucky enough not to be raised within such an impossible existence, and the other was that I still relate to Malan because I see the prejudices which he describes, everyday, in every person.

We are never too far from turning our nose up at somebody, somewhere. Perhaps you could say that we are intolerably tolerable until something pushes us to reveal how we truly feel about each other, even if it isn’t directly about skin colour, it can be a myriad of other personal things.

So the subject matter was the biggest hook for me, and it was quite a powerful one because I have a lurking curiosity about human nature, and how beneath the cool exterior of most individuals I see in the street, lies a whirlwind of mixed emotions, beliefs, denials, desires and experiences.

This study led me to write about the 18th century, where mankind had never been more divided by social class. You were either wealthy or you were dirt poor, and nobody wanted to know anything about the latter.

Think about a book which you enjoyed the most, what hooked you in and why?