A discussion about the stage of ‘final editing’ on twitter prompted me to create this post. In fact, I wasn’t just prompted to blog, I was compelled to make the whole thing a statement and reminder of what we must go through to get to the end point.

The proof of which I present in the mug below.

This shows all ‘new’ writers out there that editing  (and all the zany backed up versions of it) is about as much fun as checking your monthly bank statements.

Though it does become a part of our lives, along with drinking too much coffee or tea. 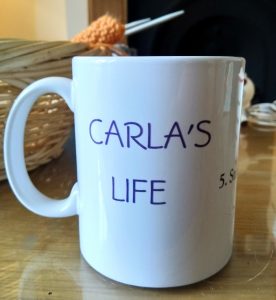 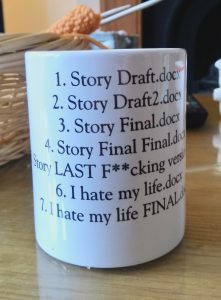 Yes I know that I sometimes swear at myself for lying when I tell people I am currently working on the final edit, when actually I’m just sitting on my phone telling people.

I swear, however,  this time, I actually am getting it done and that’s a fact.

Well there never would be one if you didn’t simply decide that you were never going to change the manuscript again.

At some point you have to say..

“This is what I’ve achieved and it’s the best I can do, and I never want to read it again unless I am forced to at gunpoint.”

That’s the final, final, final because nobody wants to really die after putting in so much hard work.

That’s when you either self-publish or sub it along with your query letter and  move on to the next project with momentous relief.