Many friends ask me why I chose to write a book set in Victorian London. The answer is simple.I love all things Victorian. As a big fan of classic literature (which does not make me boring, old-fashioned or more intelligent) I would like to think it only enhances my knowledge and the culture of the period.

It took a six month research period into the eighteenth century before I was ready to sketch a storyline. I first thought about the theme I wanted to follow, and the message I really wished to portray. The book focuses on the battle of survival of the destitute. It encompasses the murkier aspects of Victorian life which today, many have neither heard of, nor have any reason to think about.

Setting the story 150 years ago within the slums of back street London, was always going to be tough writing. There is so much sensory misery to portray that it was difficult to sift through the important details, and yet still offer an accurate representation of the period. There was also the question of whether to use a more authentic prose, or contemporary?

In many of today’s period novels the language is simple and the preference of Editor’s for ease of reading. So I took a gamble here and kept my narrative, not quite ‘Dickensian,’ but more leaning towards the ‘flavour’ of the time. A good move or bad? Who knows. That really is how it wanted to be written. The prose happened naturally. So far it has yielded positive results.

When you begin to write in the first narrative perspective of a young Victorian girl, you find yourself compelled to drop all modern slang and phrasing. You articulate better. You substitute ‘don’t’ for ‘do not…’ some sentences become a little more florid and expression tilts heavily into emotional much more than practical. Maggie’s voice began to flow very naturally for the period. As I grew into the tale I became Maggie, sitting at a modern computer in 2012 telling my sorrowful tale back in 1866. This foray into the past and its paradox to life today, was hugely enlightening.

For a good while during my months of writing I sat with my shoulders back and head poised elegantly, my legs appropriately crossed, and my little finger annoyingly threatening to extend itself when I lifted my mug of tea.. all to the greatest amusement of my husband. Unfortunately, for a while, I also adopted some of the notoriously prudent attitudes towards the subject of sex: and well, that didn’t go down too well.

But moving on… keeping a period story as accurate as possible is paramount to its success. If Maggie were to apply for a position at HMV Music Store on her walkabouts through the centre of London, the story would fail dramatically. Remembering tiny details is also imperative. Getting ‘tripped up’ by readers on the inaccuracy of dates/times/places/events is something critics just love to do. And it happens to the best of published writers.

There is masses of research required into the entire history and background will never be written, but which the writer must know. If a lantern is switched on, were lanterns yet invented? Did they eat and drink from cups, mugs, plates or saucers? What did the destitute eat? How did characters speak? Were there any colloquial accents that the author could provide a little taste of in the dialogue? How simple was medical care? When did carriages become cars? And what of furnishings: garish or plain? Cotton or silk?

Once the setting and description is all good and done, there are the social and racial divisions, moral attitudes, the laws, where did people mostly work, how much did they earn? And on and on it goes until you find that you have to be quite the expert in the era.

The theme was easy to establish. I had watched so many BBC drama adaptations based on this period, all usually focusing on the life of the middle class girl either being swept off her feet by the local new dashing chap, or abandoning dreams of such, and aspiring to become a law-abiding maid, spinster, seamstress, governess. (Very few positions available here!) And I had to ask, where is the story about the  people in the slums? The religious corruption towards unwed mothers and their babies? The booming baby-farming business and the factory diseases.. etc?

Not many ever dared speak of these things. Charles Dickens’ himself, spent many years protesting with local governing bodies in the hope of providing improvement and reformation. But even he was often begged to remain quiet. This is because the poor were an embarrassment to society, and sadly, much of the middle to upper class didn’t care for them.

“The poorest slum dwellers are there for a God given reason, and we ought not to question it,” was the attitude of the time. They were stepped over and left to God’s fate.

In time,  improvements did come, but I realise that never had the division between ‘class’ been greater in British history than in Victoria’s reign. To this end, I felt I needed to select one of these slum-dwellers out of the past and give them a voice. And the voice really wanted to be heard! Even when I stopped a writing session Maggie’s voice would continue on. She would say..“What is the point of my having ambitions or dreams, if I could never achieve them? Do you, in your 21st century sumptuous bed, realise just how cold, hungry, and neglected I was?”

Maggie is six years old when her story begins, and through her eyes I attempt to show readers in 2012, what she witnessed, saw and felt in 1866… her grandmothers death beside her, her mother’s still born twins and the ongoing struggle to prevent her family from being sent to the workhouse. It was horrible. Depressing yes, miserable yes, but realistic? YES. These events were very real.

Despite the fact that the mortality rate was staggeringly high I led my heroine into a grand old age for the sake of a story. In reality however, so many families perished, ‘one by one they dropped like flies..’ Poor sanitation, disease and succumbing to the harsh elements were much more likely than reaching full adult-hood.

But in ‘The Last Gift,’ there is a happy ending, because happy endings result in happy readers. Mostly! At the end of the book, I provide a short reference to sources and links to the historical events and facts as they appeared in the book. If you choose to read it, you will discover some things either forgotten, or unknown, about one of the greatest and saddest periods of British history. 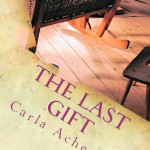 The Last Gift is now available on Amazon.com