The Rabbit Who Wants To Fall Asleep – And So Do The Parents!

The Rabbit Who Wants To Fall Asleep – And So Do The Parents! 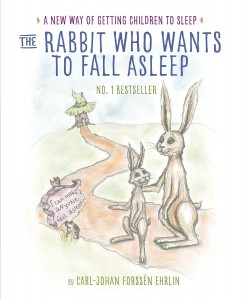 I’m not much into covering news of book story major successes, but author Carl-Johan Forssén Ehrlin seems to have had his big dream come true as a self published author. His children’s book, The Rabbit Who Wants to Fall Asleep has just landed itself in the summit of amazon’s rankings, even nudging aside the hugely popular – The Girl on The Train, catapulting to the top of Amazon’s charts in the last few days.

The book itself is said to concentrate on helping young one’s fall asleep. The main character Roger Rabbit intends on visiting Uncle Yawn, then on his way meets sleepy snail and heavy-eyed owl. Is it me or does this sound very reminiscent of a very famous children’s book where a certain farm animal clucked his away along under a blue sky towards a castle, meeting various other poultry along the way, until finally being duped into getting eaten by a wolf?

What is quite astonishing too is the amount of positive feedback this book has successfully garnered, with over 100 readers offering a 5 star rating, compared to 60 rating it 1 star. Some even expressed the book as ‘magical’ with a large percentage of the reviews showing quite an interesting contrast:

Read this book to my Grandson and when I had finished he turned around and fell into a deep sleep! I read it to my other 2 Grandchildren on a sleepover and they fell asleep halfway through!
Brilliant

On a more pessimistic angle, another reviewer who gave the book just 1 star, wrote:

Perfect if you are trying to bore your child to death. It worked on me but had absolutely no effect on my four year old.

With that in mind, does it not indicate that it really depends on the child in question? Surely this tale can’t be more magical than Peter Pan or any other well known classic?  Perhaps it’s the simple case of the book helping the parents yawn (not a hard task given the anguish most parents face at bedtime) which thus produces a sleep-inducing effect on the child.

On the whole I would be very interested to try this story out and see whether it does indeed hold some magical qualities. I also wonder if, on the back of his success, will Erhlin produce a similar title for the millions of pill-popping insomniacs in the world?

Check out this book at the Amazon store.