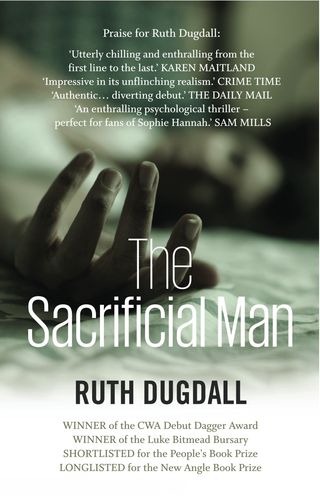 The plot revolves around a teacher named Alice who has helped her “boyfriend” commit assisted suicide. The details of the case are very strange. There is a gruesome element to the death that even makes the hardened police man who visits the scene throw up. Alice or Robin as she likes to be known now faces a court case and it is up to her probation officer to give a recommendation around sentencing.

The rest of the book leads us through Alice’s explanation for her involvement and uncovers much of the back story of her life.

The book has ample twists in the plot to keep sustained interest. However this makes the job of reviewing it difficult. Anything discussed in depth could be potential spoilers and as such I’ve gone into certain subjects in much less depth than I would normally find appropriate.

The key focus for the sacrificial man is an exploration into the moral dilemmas posed by assisted suicide. This is a difficult and interesting subject, both sides of the argument are covered. The pro assisted suicide stance is delivered to us through the main character’s dialogue. The arguments against are shown to us within the narrative of the story itself. The book deals with the subject matter fairly and doesn’t come down with a firm conclusion on way or another.

Another key theme of the book is mental health. The sacrificial man gives us some insight into behaviours that are outside the norm, a great deal of this is quite fascinating and feels quite believeable.

Characterisation
By far the majority of time in the book is devoted to the one person, Alice. I took an instant dislike to her as a person which is an unusual reaction for me. Far from being a negative comment this actually demonstrates the quality of the writing. You aren’t supposed to like her.

The book does lead us through a journey to get us to understand her, but even still I retained my initial dislike for her. Her characterisation was very real if not very rounded, just like people in real life. People aren’t always well rounded, she does however have plausible explanations to why she acts the way she does.

The other characters in the book however were not so well developed. I felt that the probation officer, Cate Austin, could have had a bit more of an active role than she does in the book and certainly a little background information about her would have led to some added interest. That is not to say the characters were unbelievable but rather that they just don’t have nearly as much screen time as the primary character. Lee, Alice’s regular lover, could have been explored in a little more depth too especially as Lee was an unusual person to say the least.

Feel
The book has a great feel to it. It’s easy to read and covers difficult topics with great skill. “The Sacrificial Man” is very hard to put down when you get started; each page makes you want to read the next. The strength of the characters makes the situation feel real.

What I want to say is that suicide is my choice. No-one else is to blame. Man seeks beautiful woman for the journey of a lifetime: Will you help me to die?

When Probation Officer Cate Austin is given her new assignment, she faces the highest-profile case of her career. Alice Mariani is charged with assisted suicide and Cate must recommend a sentence.

Alice insists her story is one of misinterpreted love, forcing those around her to analyse their own lives. Who is to decide what is normal and when does loyalty turn to obsession?

Investigating the loophole that lies between murder and euthanasia, Cate must now meet the woman who agreed to comply with lover’s final request. Shocking revelations expose bitter truths that can no longer be ignored.

I’d highly recommend “The Sacrificial Man”. It is one of the most enjoyable books I have read in a long time. The plotting is excellent and the books easy to read nature while touching on so many dark subjects make it a “must-read”.

Author Bio: Ruth Dugdall is a crime fiction writer whose novel ‘The Woman Before Me’ won the Crime Writers’ Association 2005 Debut Dagger Award, as well as the 2009 Luke Bitmead Writer’s Bursary.