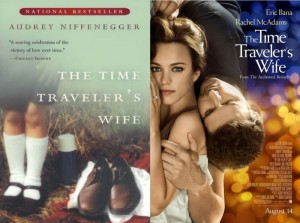 I thought I would take the liberty of offering some of my opinions on this book, which I am very close to finishing. Audrey Niffenegger’s powerful  novel is based on the time-travelling exploits of Henry de Tamble.

Firstly, if I was to comment on the book’s storyline, I would say that the plot offers both a humorous and serious angle on a very elusive concept. Henry, a pretty ordinary fellow, quite powerlessly travels back and forth within his own lifetime, whilst his long suffering wife, Clare, remains at home wondering whether or not to cook his tea! (Get a sense of B-Witched, with Darren disappearing regularly and thats without a twitch of the nose.)

It was the time travel concept in itself which drew me to the book. I loved the quirkiness of it’s premise, though I didn’t want to ponder too much over the mechanics of time travel and the ‘Einsteinian’ theories related to it; there is some scientific jargon in the latter part of the book in the hope of explaining Henry’s disability away. I enjoyed the book from a fictional vantage, regardless of the possibilities or impossibilities related to the Scientific fields of Genetics and Physics.

With each character perspective Niffenegger gives us the time travelling date, year, and the current ages of the couple. Being all topsy turvy as it is, you might find a section where Henry is 30 and Clare is 8; without warning he just happened to go back in time to be confronted with her at her pre-adolescent age.  As you can imagine, this accounts for some very awkward yet humorous dialogue, all within an impossible circumstance. In fact, times that awkwardness by a thousand, because Henry quite powerlessly vanishes and re-appears completely naked. To the outside world the couple persistently concoct wild bunches of lies to cover up the madness of their reality and Niffenegger chose to write in the first person perspective of both Clare and Henry, which I think is a nice touch giving  a balanced view of both.

I absolutely loved a couple of very beautiful narrative moments in this book, which pulled my emotions into twin depths of sadness and hilarity.

One of these is when Henry visits a ‘Doctor of Genetics’ for assistance in finding a cure. The Doctor more or less insinuates to Henry (quite rightly) that he’s a complete lunatic. Henry gives up and leaves the office feeling deflated. When the Doctor sees Henry disappear in the parking lot from his office window, he is thrown into a cerebral frenzy. The Doctor frantically races outside and jumps in the car to speak to a very non-plussed Clare, who has been sitting patiently there waiting for Henry the whole time. Henry then promptly re-appears in front of both the Doctor and Clare in his Birthday suit. A disgruntled Henry collects his pile of clothes from the floor and says to the Doctor through the car window…

“Nice to see you again. I am leaving now. Goodbye.”

He gets inside the backseat and both he and Clare wait for him to go. Their completely neutral expressions are a complete parody to the Doctor’s one of immense disbelief. Oh what a massively humorous scene that is, in one way, but you feel the need to cry at the whole ridiculousness of that situation for poor Henry and Clare.

If I have anything negative to say about this story, it is purely personal. I found the story confusing now and again, due to the nature of the theme.  Also, there is quite a bit of unfamiliar phrasing (‘i took a  bite of the bismark’.. ‘clare comes in with an armful of abaca fiber’… ‘we’ve taken to quoting kierkegaard and heidegger’…. sorry who?’)  which jarred my flow of reading. Due to this I had trouble getting through this book quickly. It took a lot more concentration than I cared to give it at times, but the overall picture is pleasant. It is definitely not a shallow story and I recommend it as a worthwhile read.