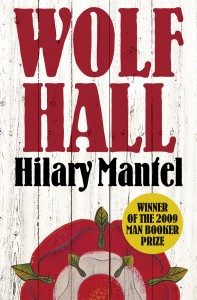 Wolf Hall is the first of a Trilogy of books. This first instalment focuses on the annulled marriage between Queen Katharine of Aragon and King Henry VIII, but through the eyes of his trusted advisor Thomas Cromwell.

NOW HOW UNFAIR would it be to rate a book one star, without at least giving a true opinion as to why one would do so? Very unfair indeed. And for that reason, I feel it necessary to offer a review and explain why I have rated this book so ghastly low. But, best opinions must come first.

The book was huge, something I wanted to dive into at the right hormonal blast. It really looks the business, offering the promise of fictional entertainment embedded with some of the best known facts of our ruling ancestors. We see the cover and know that is representative of a great important part of British history, a challenging but terrific read. For that I give Hilary an applause, what a vast achievement, something I could only ever aspire to in my dreams.

To be fair, I do not believe that any book is actually worthy of just a 1 star rating. It takes a great deal of courage to throw your work into the public domain and have it torn apart and scoured by critical eyes. I know this. I am an author too. But with this particular publication, I am dumbfounded. Not only with Mantel’s, ‘2009 Booker Prize Winning’ saga, but with Hilary herself.

Now to let a small degree of grammatical errors loose would be considered somewhat normal for most published books today. Editors, even highly-paid ones, are human after all. A small littering of typos are forgivable by the reader, if the story itself is justified. However I, like many other readers I note, have had trouble getting their teeth into this epic 500 page story, and so I realise that I am not in the minority.

My problem with this book is not only the frequent switching of POV between characters, but the lack of an established and ‘normal’ dialogue syntax. The one which many of us, as readers, are silently familiar with.

This ambiguity, I later learned, was caused by all references to ‘he’ in the text, actually belong to the speaker, Cromwell, himself. Right. That is …aside from the dozens of cases where he is not the speaker!

There is also a vast problem with short transitions between one dialogue part and another, with quite frequently, a lack of speech marks to frame the actual speaking parts.

No I did not remove the speech marks from the above narrative, they are not in the book!

Oh Hilary, why make it so impenetrable?

Any dull prose or linguistic difficulties make a book difficult for a reader to follow and will result in poor feedback. A reader wishes to be swept into a story, not lulled into a catatonic state of confusion over who is talking and who is not. Although the narrative seemed sufficiently ‘pruned,’ who exactly is talking is never ever clear. To have this degree of narrative- punishment imposed on the type of persons who would delve into a such historical book of this calibre to begin with, well, I think Mantel took a great risk.

Jarring anachronisms aside, I wanted to love this book, feed my on-going addiction of the kings and kingship of the Tudor period. The book was supposed to enlighten me ever deeper into the analytical and confoundedly disturbed mind of Cardinal Wolsey, along with the rest of the cast of Tudor England, King Henry VIII, and his subsequent split from the catholic faith and Vatican church. But I found I could not submit to my desire too easily. I could not read a paragraph without having to read it over again, just to decipher who was the speaker.

Having stumbled through the first 80 pages, painfully, I decided to give up and read no more. Life’s too short right? And I hold no allegiance to any particular author or book, but for me, casting a book aside is a rare occurrence. I feel let down and angry that I did not like this style of prose, and that the book’s main critics were proved right in my estimation.

Perhaps Wolf Hall tried too hard to be a literary masterpiece, or, perhaps it just is, and if you can read between the lines, all falls perfectly into place. Who am I to judge?

Wolf Hall is available on Kindle and Paperback at Amazon.